Karl achieved a PhD in chemistry at the University of Leicester in 1996 and is a Chartered Chemist, Chartered Scientist and Fellow of the Royal Society of Chemistry.

His work is focused on nanoscience and nanotechnology, particularly the chemistry of graphene and carbon nanotubes. He has been funded by the Engineering and Physical Sciences Research Council and the Royal Society and he has authored or co-authored over 95 publications in peer-reviewed journals which have accumulated over 4,200 citations.

His work has been recognised with numerous awards, including the international Royal Society of Chemistry Entrepreneur of the Year Award 2011 for his development of intellectual property around the production of graphene, the Times Higher Education Research and Innovation Award 2012 and the Royal Society of Chemistry Materials for Industry – Derek Birchall Award in 2017.

Karl established the Company in 2010 and, whilst he is employed by the University of Liverpool, he is Chief Scientific Officer and Director of Applied Graphene Materials.

Karl is a Chartered Chemist and Chartered Scientist, as well as a committee member and past chair of the Royal Society of Chemistry. 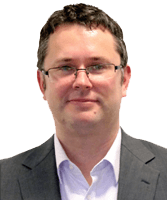